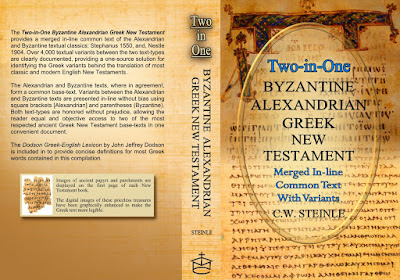 Just in time for Christmas. Hardcover edition of the TWO-IN-ONE Byzantine Alexandrian Greek New Testament. Also in paperback. The hardcover is not just a plain cloth cover with a dust jacket. This is a quality laminate hardcase full color printed cover. Be sure to "Look inside" to see the simple easy-reading format.
The Two-in-One Byzantine Alexandrian Greek New Testament is a merged in-line common text of the Alexandrian and Byzantine textual classics: Stephanus 1550, and, Nestle 1904. (Not a parallel and no messy side columns or footnotes). Over 4,000 textual variants between the two text-types are clearly documented in-line, providing a one-source solution for identifying the Greek variants behind the translation of most classic and modern English New Testaments. The Alexandrian and Byzantine texts, represented by Stephanus 1550 and Nestle 1904, where in agreement, form a common base-text for the Two-in-One Byzantine Alexandrian Greek New Testament.
Variants between the Alexandrian and Byzantine texts are presented in-line without bias using square brackets [Alexandrian] and parentheses (Byzantine). Thus, both text-types are honored without prejudice, allowing the reader equal and objective access to two of the most respected ancient Greek New Testament base-texts in one convenient document. The variants among most modern English Bible translations are addressed in the Two-in-One Byzantine Alexandrian Greek New Testament so the Greek reader can quickly identify and follow the source texts during live teachings or while listening to prerecorded audio.
Stephanus 1550 and Nestle 1904 represent two of the most respected and broad-based Greek source-texts for the English New Testament. The modern version of the Authorized King James Bible draws its New Testament portions primarily from Stephanus 1550. Stephanus standardized the chapter-and-verse numbering system used today and Stephanus IV was the chief base-text of the Geneva Bible, making the Stephanus texts the official New Testament Greek source of the Protestant Movement for more than 300 years. The Alexandrian text-type is represented by Eberhard Nestle's, The New Testament: Text with Critical Apparatus, published by The British And Foreign Bible Society.
Images of ancient papyri and parchments are displayed on the first page of each New Testament book. The digital images of these priceless treasures have been graphically enhanced to make the Greek text more legible.
The 2012 edition of the Dodson Greek-English Lexicon by John Jeffrey Dodson is included in the appendix to provide concise English definitions for most of the words found in this compilation.
Posted by C.W. Steinle at 12:16 PM