The Renaissance of Classical Philosophy

The two prior chapters recounted the oppression of by Church leaders who were not honest or humble enough to admit that they had ceased from following Christ.  Taking advantage of that Name above all names, they wore it as a cloak for vice.  The papacy profaned that precious Name in exchange for worldly pleasures.  The people were compelled to make sense of this spiritual tragedy by drawing three general conclusions; that God is not able, that the Church must be reformed, or that a false Church had arisen and needed to be replaced by a revived .  (This third reaction bears similarities to the attitude of today's .)
Christians were left with the quandary of what to make of a Church which had obviously and inexcusably fallen into sin.  They were forced to answer the sensitive question of; "What constitutes the true Church?"  Obviously God, His Christ, and His Spirit could not have failed.  Christ said the gates of Hell would not prevail against His Church.  Reformers, like Martin Luther, affirmed that the Roman Church was part of the , but that its leadership and practices had missed the mark.  Other groups, such as the Anabaptists, rejected as a false Church.  But all of the major Reformers made a distinction between the masses who attend church and those individuals who have genuinely surrendered to Christ.  This distinction was necessary in order to maintain that the Catholic Church was the continuing and, at the same time, to account for souls in that Church, including its leaders, who had lived like they were sons of the devil.
Because the unfolding of the mystery of lawlessness is our chief interest, this chapter will cover the social and political thought of the late Middle Ages through the Renaissance.  During this period most people were still grounded in the Christian faith, whereas during the Enlightenment many began to fall into Deism.  We will continue to draw on the research and commentary of Philip Schaff through this third chapter of Church History.
The turn of the first millennium without the return of the Lord, along with the unsettling corruption of the Church, gave rise to a movement called Scholasticism.  The schoolmen began to make an extensive study of the sea of writings by the Church Fathers in order to solidify the doctrines of the faith.  The Bible became one of many sources used in this search for truth; thus, the writings of the Fathers were canonized and set on a par with the Scriptures.  Writings from outside the church were also included in scholars' libraries. These included classical Latin and Greek texts.  During the first millennium, these writings were mostly banned because they promoted worldly wisdom and pagan morality.
The ban, which had been placed by the Church upon the study of the classic authors of antiquity and ancient institutions, palsied polite research and reading for a thousand years.  Even before Jerome, whose mind had been disciplined in the study of the classics, at last pronounced them unfit for the eye of a Christian, Tertullian's attitude was not favorable.  Cassian followed Jerome; and Alcuin, the chief scholar of the 9th century, turned away from Virgil as a collection of lying fables.74
At first the schoolmen sided with the papal claims that the apostolic see held authority over the Church and the State.  But the northern nations of the began to look to the classics of antiquity as reasonable alternatives to the violence and chaos caused by a Church which had been high-jacked by the selfish desires of fallen men.  The philosophies of men held the promise of a system that might better the human condition.  This study of the Humanities was even embraced by the churchmen.  People began to reason that God was in control of the spiritual realm, but man was the proprietor over the material realm, and should do whatever he could to make his world a better place.  Soon the Humanists began to estimate the philosophies of Plato and Aristotle to be equal, or even above, Christian ideology.  Thomas Aquinas studied Aristotle and incorporated some of Aristotle's philosophy into his theological catalog, the Summa Theologica.75 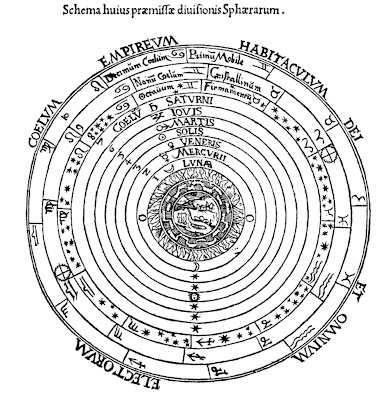 The scheme of the aforementioned division of spheres. · The empyrean (fiery) heaven, dwelling of God and of all the selected · 10 Tenth heaven, first cause · 9 Ninth heaven, crystalline · 8 Eighth heaven of the firmament · 7 Heaven of Saturn · 6 Jupiter · 5 Mars · 4 Sun · 3 Venus · 2 Mercury · 1 Moon